Homepage > It's my turn! The TV Do-Over Blog Hop is all mine today!

It's my turn! The TV Do-Over Blog Hop is all mine today!

For my first of two rants, I’m going to start with a longtime favorite of mine, Warehouse 13. 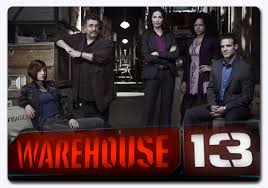 I couldn’t handle it when Artie killed Leena.  Couldn’t.  Handle.  It.  Artie is the rock, the “father figure” to all of the Warehouse 13 agents.  I know, I know, he had been whammied by an artifact when he did the dastardly deed, so he wasn’t technically to blame.  Even so, I would have liked to think that Artie, of all of them, could have found it in himself to fight off the astrolabe’s downside effects. 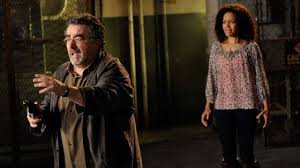 At least, if Leena had to die, couldn’t someone else have done it?  Not one of the other main characters of course, but how about one of the many villains who frequented the show?  I mean, bring in a baddie and make Artie have to choose between the fate of the Warehouse and Leena’s life!

I realize this crazy plot twist gave the characters, especially Artie, a lot to work through, and we got to witness some great acting because of it.  Here comes the however…  However, I still feel like Artie got off scot-free.  Not that I would want Artie to suffer, because he did at the hands of his own conscience.  I just think there should have been more consequences for him, like even losing his job, at least for a while.  I guess my beef was really with the regents, more than anything.  The regents were so matter-of-fact about Leena’s passing, it made me angry.  I never liked the regents, anyway. 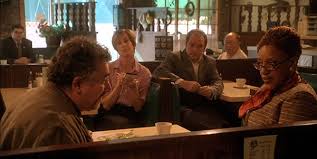 That said, when I found out that Warehouse 13 was to come to an end this year, I got all nostalgic and decided to fan up and watch again.  Luckily, there were a few rerun marathons on Syfy to catch me up to speed so that I could enjoy the final episodes.  And I did.  Immensely. 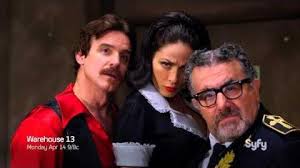 I had missed the zany cast of Warehouse 13, plus I had to know whether they’d go for the HEA and finally let Pete and Myka fall in love.  Of course, they did, but I have to say I was a little disappointed that they crammed their profession of love into the last episode.  I wanted a little more “Pyka” time! 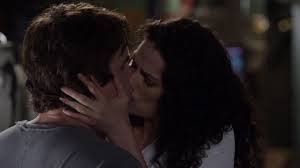 All in all, Warehouse 13 is a great show, and aside from the little hiccup there, it had a nearly perfect run.  And unless I read something into it, they actually apologized during the final episode for killing off Leena.  In one of Mrs. Frederic’s memories, she and Leena are meeting for the first time.  Leena has a revelation that she will someday die in the Warehouse, telling Mrs. Frederic that her death will not be able to be prevented, “but it’s all right”.

If that wasn’t an apology, I don’t know what is.

Stop back by my blog again tomorrow, where Midwest Writers Guild prez Aaron Deckard will take his turn at the TV Do-Over Blog Hop!