I'm back again for a second turn on the Stupid Movie Blog Tour!

I hate to call this movie “stupid”, because I love it so much.  But, for an almost-40 soccer mom to sit and be enthralled by a movie about a high school musical, I admit, is kind of stupid.  Anyway, I considered using “Her” as my stupid movie, because let’s face it, Joaquin Phoenix falling in love with Siri is a stupid plot (my husband had honestly thought it was supposed to be a comedy until about 30 minutes in), but I’m sure I’d get all kinds of backlash about calling an Oscar flick “stupid”.  So, my pick is GET OVER IT. 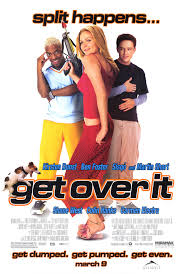 Stupid hijinks aside (such as Martin Short singing “Camptown Races” dressed as a hobo and Carmen Electra cast as a stripper—a stretch, I know), GET OVER IT has a lot of really good actors in it.  Ben Foster is the lead, and even though he’s best at playing creepy sociopaths, he is lovable as the jilted boy next door.  Kirsten Dunst, while not the best actress, is a staple of feel-good high school movies.  Martin Short is hilarious, no surprise, and Colin Hanks steals several scenes as the laid-back best friend.  Ben Foster’s parents are played by Swoosie Kurtz and Ed Begley, Jr., who play perfectly off of each other.  Sisqo (remember “The Thong Song”?) can’t act worth a crap, but he is adorable. 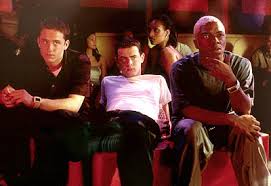 It’s fun to watch the many meltdowns Ben Foster’s character Berke goes through during the movie.  At the beginning his soul mate, Allison, dumps him, and as he is angrily trudging home, the nonsense starts with an impromptu parade following him down the street, complete with singer Vitamin C lip-synching “Love Will Keep Us Together”.

Allison of course finds a new boyfriend, Stryker (Shane West), who is everything Berke is not, including being the lead singer of a boy band and being British.  (“Striker, I'd be careful with that accent if I were you. Because you're beginning to sound a lot like Mary Poppins.”)  It’s hilarious to watch Ben Foster’s trademark anger simmer the entire movie as he watches these two together.  The plot centers around the fact that he joins the school musical in order to be around Allison in order to win her back. 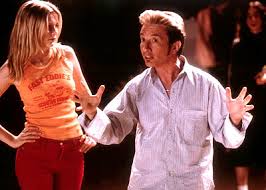 He’s written a musical based on “A Midsummer Night’s Dream”, because “Bill Shakespeare was a wonderful poet. But Burt Bacharach he ain't.”  He’s egotistical, he’s delusional, he’s mean, he’s a failure, he’s…absolutely the best thing about this movie.  He wrangles a bunch of high schoolers into a troupe of actors (sort of) by opening night through his unusual teaching style:  “It's just not very good. I could lie to you, but I would do you a disservice, because it's—it's just bad.” 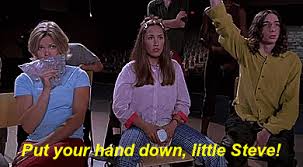 The problem with most high school movies where they have to train for some big event, once they get closer to the event, they start learning how to be better people and acting right.  They pull together and somehow become stars in their particular field.  And frankly, the movie gets boring because there’s little conflict.  Well, not in this movie.  Nobody learns anything, and the musical is horrendous.

Unlike a lot of other movies, the final scene is one of the funniest.  I won’t spoil it for you—find a copy and watch it for yourself.  And if you’re worried about being made fun of for watching a stupid movie—GET OVER IT!

Oh, and if it couldn't get better, then this happens:

Just made your day, didn't I?  You're welcome.

Mark is up next on the Stupid Movie Blog Tour!