Homepage > The Stupid Movie Blog Tour--A Night at the Roxbury

The Stupid Movie Blog Tour--A Night at the Roxbury

When Deb Nam-Krane announced her Stupid Movie Tour, I immediately called "A Night at the Roxbury".  I've lost track of how many times I've watched it.

It isn’t often that a Saturday Night Live skit premise is solid enough to carry an entire movie, but when it is, the results can be glorious.  Or stupid.  Or both, but mostly stupid, which was probably the point in the first place.  SNL exists to find the silly in everyday life, point it out, and make us laugh about it.  A NIGHT AT THE ROXBURY is nothing if not silly and funny.  They weren’t going for an Oscar nod here, people.  They were going for crazy, stupid fun.  Nailed it.

Thanks to the Butabi brothers, every time I hear the song “What Is Love” by Haddaway, my head automatically starts nodding to the beat.

So, to make the leap from five-minute skit to 82-minute feature length film, we need a plot, other than two guys going around annoying women.  We find out that the Butabis aren’t jerks (like they’ve been portrayed in the SNL skits), they’re just horribly bad with women and have absolutely no game whatsoever.  Steve’s best lines seems to be “’Sup?” and “Hey, hot lady”.  They think once they’re able to get into the Roxbury, their luck will change.  Now we have our plot (sort of)—the brothers decide to do whatever they have to do to get into that Holy Grail of nightclubs.

They try several different tactics to get in.  They try to schmooze and joke with the bouncer (Michael Clark Duncan).  “You two are brothers?”  “No…YES!”  No luck.

They try to follow “The King of ’21 Jump Street’” Richard Grieco in without being noticed.  No luck.  They try to make themselves appear cool in the line by telling their Emilio Estevez sighting story.   No luck.

Finally, they resort to bribery, although they’d probably have better luck if they didn’t try to give him a bunch of dollar bills and coins.  “George Washington and…George Washington.  Roosevelt…”  Again, no luck. 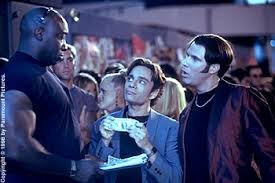 Enter Richard Grieco.  (Best.  Cameo.  EVER!)  Grieco runs into the back of their van with his unlicensed racing car, and in order to avoid getting the cops involved, he offers them a favor.  What do they choose?  VIP access to the Roxbury, of course! 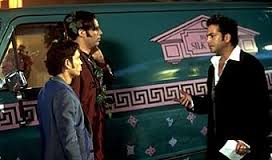 The best lines and gags are definitely in the first 30-45 minutes of the movie.  After that, they really have to get going on the plot, so it's maybe not quite as much all-out fun as the beginning.  However, the cast is full of hilarious actors, which makes the movie fun to watch.  Of course, there’s Molly Shannon as “the girl next door”, but Stifler’s mom ultimately ends up with Steve.  There’s also Loni Anderson, Dwayne Hickman (Dobie Gillis), Lochlyn Munro, Colin Quinn, Elisa Donovan, Eva Mendes, and many others trying to steal scenes from Will Ferrell and Chris Kattan.

Anyway, of course you have to have to obligatory break up/get back together “black moment” in every movie.  For a little something different, they do it between the brothers, not between them and their love interests.  It’s way funnier to see two grown men crying over the loss of each other.  Anyway, just in time, Doug crashes Steve’s wedding (a la John Cusack in “Say Anything”) and saves him from marrying Molly Shannon’s character.  The brothers kiss and make up. 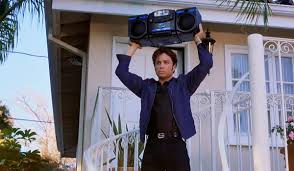 To top it all off, the Roxbury club owner brings the Butabi brothers in as partners in his new club, they finally win the respect of their father, and they both get the perfect girl.  And they didn't learn a darn thing from it, so they're still the clueless losers they always were.  All is right with the world.  Score! 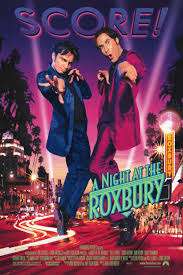 Head over to Sarah Woodbury's blog on November 14th for the next stop on the tour!