If you’re like me, you have very little interest in slaving over a hot stove, especially in October when there are so many other fun things to do.  Do I browse Pinterest and pin intricate recipes that are more craft project than edible?  Heck, yeah.  Do I have any intention of making said recipes?  Heck, no!

Here’s several recipes to get you through Halloween with minimal effort but maximum “wow” factor.

But Caroline, you say…everyone makes the coolest cupcakes for Halloween.

I want to be the one with the awesome Halloween cupcakes this year!!!

So do it.  But DON’T get cute with it.  Go against the grain and make gross ones.  That way if you’re in a rush and they look bad, no one will be able to tell you didn’t do it on purpose.

Killer and Zombie cupcakes--I made these.  Grossed a lot of people out.  Gained a lot of street cred. 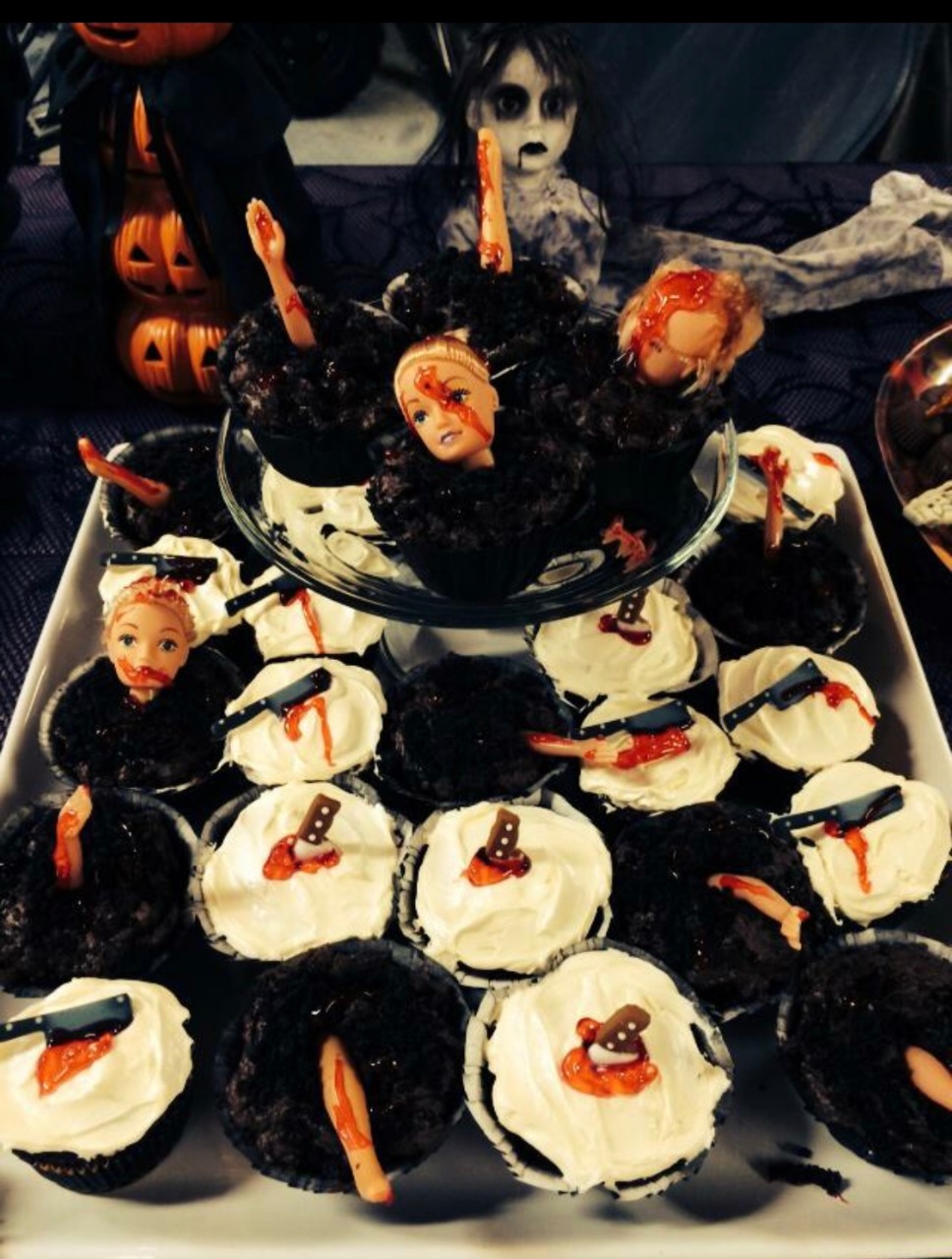 Squirt some red gel haphazardly on top of the iced cupcakes.  Stick candy knives in the “blood.”  Done.

Oreos, crushed in a food processor

Cheap Barbies (the $2 kind from Dollar General), naked and cut into pieces—you’ll want to cut most of their hair off to keep it out of the icing.  And don't use the torsos.  Naked Barbie torsoes on cupcakes could send the wrong message.

Place Oreo crumbs on a plate.  Turn cupcakes over and mash icing into the crumbs to adhere, to resemble the soil of a fresh grave.  Stick dismembered Barbie parts into the tops of the cupcakes.  Squirt red gel onto Barbie parts to make the whole thing that much grosser.  Done.

Press dough into a deep dish pizza pan or form into a circle on a pizza stone.  Bake at 325 degrees for 20 minutes, or until it seems done in the middle.  Doneness for this on is sometimes difficult to decide, mostly because I don’t always mush the dough evenly across the pan.  But most people I know don’t seem to mind underdone cookies, so you’re probably good to go.  Once cooled, draw a big spiral with the black icing.  Make spokes coming out the middle to resemble a spider web.  Cut the ring part off the spider ring and place the spider on the web.  Done.

Cheesecake Ghoul—so this one was born out of me being too lazy to read a recipe.  The original recipe said that you should make a pumpkin pie, make a dough face, put it on the pie, bake it all together, then put strawberry jam in the orifices.  Way too complicated, plus I don’t like pie.  Anyway, I looked at the picture only and assumed it was a cheesecake face with graham cracker crumbs and cherry pie filling.  I think mine’s better.  (I couldn't find a photo of mine, but it pretty much looked like this one.)

Cover the bottom of your dish with graham cracker crumbs.  Spoon filling on top, in the rough shape of an oval for the face.  Carve out eyes, nose, and mouth.  Fill holes with cherry filling.  Done. 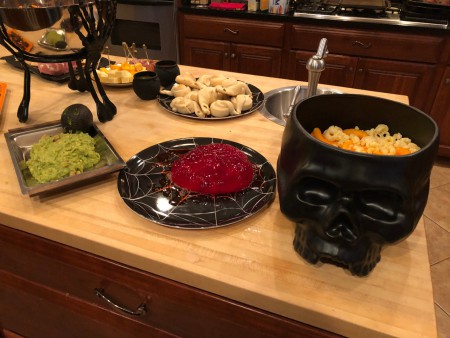 Make the Jello according to the package directions.  Pour into mold (you can get one at any craft store) and refrigerate.  Overnight is best, because it takes forever to firm up in the brain mold, which is fairly deep.  In a pinch, I’ll put it in the freezer, but that doesn’t always turn out great.  Unmold and done.

Oh, and see the big skull next to the brain?  It's filled with Cheetos "Bag of Bones" and puffs.  Another easy Halloween snack where you had to do nothing but open a bag.

Peeps on a stick

Place Peeps on skewers.  Place in vase.  It adds a little height to your buffet.  Kids like to eat stuff on sticks.  Done. 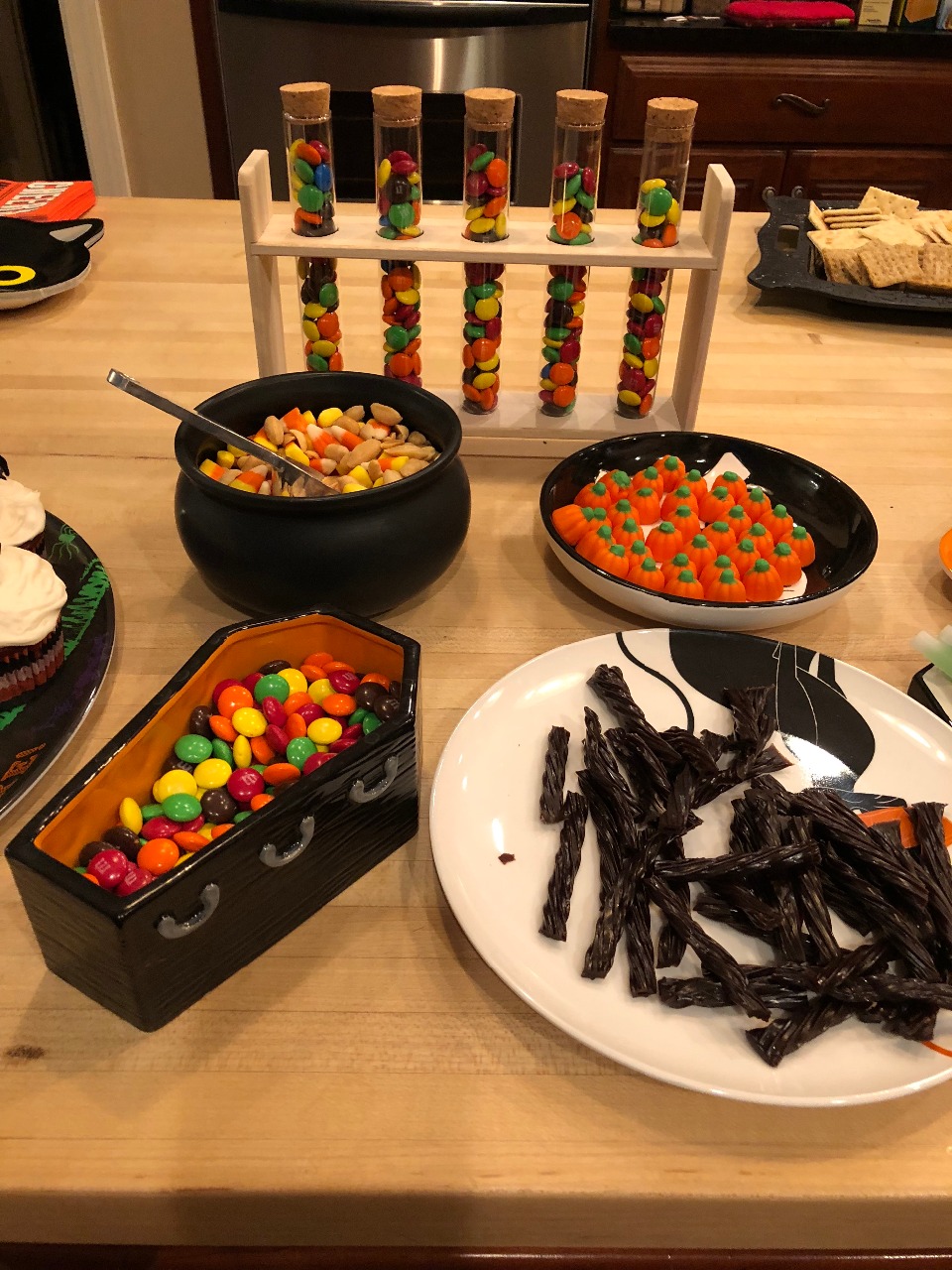 Literally no one is going to have anything against you serving candy they can scoop up by the handful.  Except maybe your dentist.

Or if you're really feeling saucy...Candy Corn and Peanuts

Mix the two together in a bowl.  It’s exactly as complicated as it sounds.

If that’s not a spread that will knock the socks off your friends, then you need new friends.