13 Days of Halloween DAY 7--Bingeworthy TV so good it's SCARY!

Disclaimer:  This is a bit of a cop out to my

Deborah Nam-Krane and I scheduled the "Bingeworthy TV Blog Hop" a month ago, before I decided to do the "13 Days" bit, so rather than make a double post today, I'm going with just the one.  I feel like a slacker, but I have a looming deadline (Nov 1) for a first draft that's 5k words away from completion.  And that doesn't count fixing some glaring continuity issues I know I have going on...

I seriously can’t keep up with all the bingeworthy shows out now.  I’ve got my network series I watch weekly (9-1-1, Hawaii 5-0, Dynasty, The Rookie).  And I also have my seasonal cable series (Killjoys, It’s Always Sunny in Philadelphia, Game of Thrones, Silicon Valley, You’re the Worst) as well.  But add in Netflix and Amazon Prime, which we’ve had for a while, and then now we’ve added Hulu, and there’s more to watch than I can ever hope to watch if all I did was watch TV 24/7 for the rest of my life.

I don’t have that kind of time, so I have to be choosy in my bingeing.  My two top binge picks are Insatiable (Netflix original) and It’s Always Sunny in Philadelphia (FX original available on Hulu), which I have recently discovered. 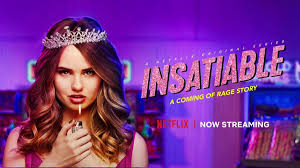 My kids grew up watching Debby Ryan on the Disney Channel, and of course since kids programming was on all the time in my house, I grew to have my favorites as well.  (Although I prefer Nick to Disney, hands down.  Victorious was always my favorite—which is a big part of the reason I’m watching Dynasty, because I adore Elizabeth Gillies.)  But I digress…

Insatiable is about Patty (Debby Ryan), who is a “fatty.”

I’m sure the name was chosen for that particular joke, but whatever.  She gets into a fight with a bum and has to have her jaw wired shut, causing her to lose an amazing amount of weight very quickly.  Now thin and beautiful, she begins to be treated differently, and for some reason decides she needs to become a beauty pageant contestant.  It seems like a big leap the way I’m telling it, but I promise it makes sense in the show.  Enter Bob Armstrong (Dallas Roberts, who steals every scene he’s in and is a cosmic twin of the late John Ritter), who is both her lawyer for her assault charge as well as a disgraced beauty queen coach itching to get back into the biz.

A match made in heaven, right?  Well, it gets nuts from there.  Add in hilarious performances by Alyssa Milano (Bob’s wife) and Christopher Gorham (Bob’s nemesis, also named Bob) and a ton of cringey one-liners, and this show really pops. 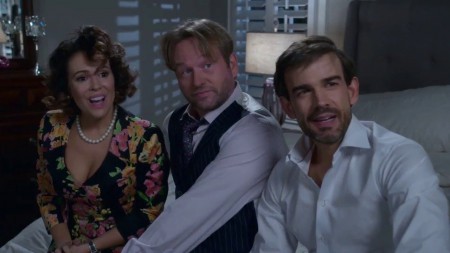 I admit, the tone of the show sometimes veers off course a little, but it gets back on track and ends with a real kicker.  There was a lot of backlash at the beginning by totally misinformed sheep who jumped on a misguided bandwagon (like ALWAYS happens on social media—can we not research hot-button topics and make up our own minds, people???) about this show being about body-shaming.  It is anything but.  It really explores the psyche of people who have been body shamed (and gay shamed, and poor shamed, and religion shamed—nothing is off the table here) and how they deal with the pressure of it all, especially in high school.  Sometimes they make the right choices, but sometimes they don’t, and then they have to deal with the backlash of that as well.  That hubbub seems to have died down, probably when the people making the noise actually took the time to watch the show instead of fighting about it.

Speaking of fighting, I stumbled onto It’s Always Sunny years ago but unfortunately couldn’t get into it—the characters were all yelling at each other, and I couldn’t get a sense of what was going on.  In short, I didn’t give it a chance, which was a big mistake.  The show has some of the cleverest writing in all of entertainment, and if you don’t pay attention, you miss things.  Practically every line out of their mouths elicits a laugh from my son and me (it’s our favorite series), but many things they say are so laced with razor-sharp sarcasm, the show makes you think while you’re yukking it up.  They make it a point to skewer every hot topic out there, and they do it so well it’s sometimes painful.

The five leads—played by genius developers/writers Rob McElhenney, Glenn Howerton, and Charlie Day, the hilarious Kaitlyn Olsen, and comedic legend Danny DeVito—are all horrible people who own/run Paddy’s Pub in Philly.  “The Gang,” as they call themselves, gets into ridiculous situations every week.  They’re constantly trying to play angles and run schemes to get ahead.  Of course their efforts always backfire, and hilarity ensues.  They’re into Season 13 right now, and still going strong, so there’s PLENTY to binge.  If I had to pick several favorite episodes, they would include in no particular order…

“Time’s Up for the Gang”

“The High School Reunion” (both episodes) 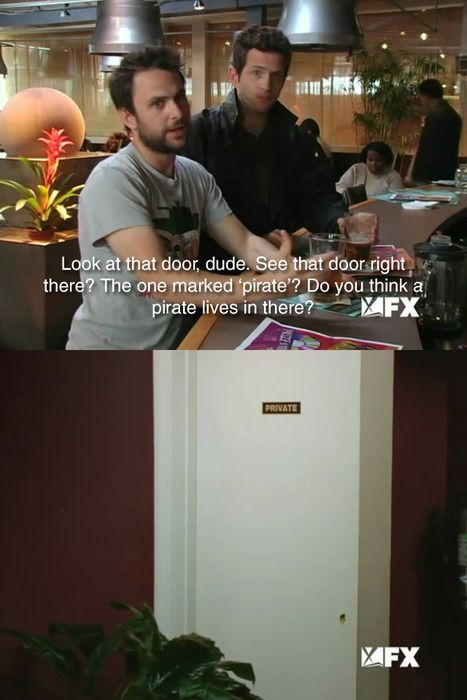 Now get out there and binge away!

Oh, I almost forgot the most important part—if you’re easily offended, don’t watch either of these shows.  Like, ever.

Don't forget to check out the rest of the blog hop: