Homepage > BREW OR DIE is out today!

BREW OR DIE is out today!

My latest release in the Java Jive series,

BREW OR DIE, is on sale today!

Scroll down to enter!

The art was again made especailly for the book

Check out her other gorgeous work here.

Book Blurb:
Nashville’s perkiest private eye—coffeehouse manager Juliet Langley—goes undercover in the party-planning industry to solve a suspicious death in this thrilling cozy mystery from USA Today bestselling author Caroline Fardig.
Inspired by her past sleuthing successes, Juliet Langley has officially joined the ranks of Nashville’s licensed private investigators. Her best friend, Pete Bennett, doesn’t worry that her detective work might interfere with her full-time job running his coffeehouse, Java Jive. He just wishes she would spend her free time rejoining the local music scene instead of tailing cheating spouses. But when one of Java Jive’s baristas, Shane, asks Juliet to look into the suspicious death of his fiancée, Pete encourages her to plow full steam ahead.   Since his fiancée died on the job, Shane suspects that her party-planning colleagues are up to something criminal—and will do anything to keep it quiet. After Juliet recruits Pete to go undercover with her at a wedding showcase, she discovers that white lace and black satin have a way of hiding big, fat secrets.   If that weren’t enough to fill her plate, her latest P.I. job has her crossing paths with her ex, Detective Ryder Hamilton. They’re barely on speaking terms, but to solve the case, they might have to cooperate. No matter where Juliet goes, she’s brewing up trouble. 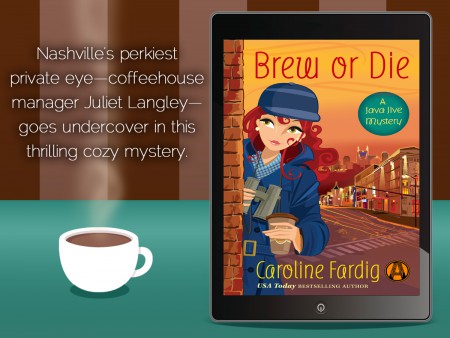