Homepage > Congrats to Isabella Louise Anderson on the release of CARDS FROM KHLOE'S FLOWER SHOP!

Congrats to Isabella Louise Anderson on the release of CARDS FROM KHLOE'S FLOWER SHOP! 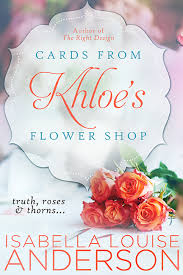 Isabella Louise Anderson is on my blog today with a guest post, info about her new release, and a giveaway!

Fun Fact #1: There were three drafts of this book, though what some many don’t know is that a man played a leading role, along with Khloe, Gabby, and Connie. Richard was a businessman, who was married to his high school sweetheart, and while his wife thought they were happily married, Richard was cheating on her with a much younger woman (a waitress he met at a restaurant while having a business lunch). Without any words, he and the woman started their affair, where Richard was pleasured in ways he hadn’t been in years. Soon, the woman fell in love with him, and Richard promised to tell his wife he wanted a divorce, but he just couldn’t do it—his wife did it for him. In front of hundreds of people, who came to the opening of her art gallery, she courageously divulged to a roomful of people—including her husband—that she knew about his infidelity, and that night, when she came home, she kicked him out. In the end, Richard and his wife took the time to get to know one another again, and he vowed to change and even proposed to her again.

While Richard and his infidelity was fun to write, along with the sizzling sex scenes, I’m grateful to my beta readers for encouraging me to delete Richard’s character from the book, and for this reason, I think it emphasizes three strong female characters that I hope my women readers will relate to.

Fun Fact #2: I have a favorite local flower shop that I love to go to. Each time I go into it, I’m in awe of the place, (as of recently, it has expanded, and it was everything I’d imagined Khloe’s Flower Shop would be). The flower shop premise came to me because I’ve always loved sending and receiving flowers. That being said, I’ve also wanted own a flower shop, and wrote the vision of how I’d want it to look like, how I’d run my business, and, of course, to read the messages written on the cards, (each one would tell a story, I’m sure).

Fun Fact #3: Not only did Khloe Kardashian inspire the main character, she inspired the name for the title of the book. Now, before you get on my case for the silly “reality” show—a guilty pleasure of mine—I wrote this book in seventeen days, during NaNoWriMo, which I’m proud of. I had no idea about what this book would be about, names, characters, or anything like that, but thanks to my seeing Khloe and Lamar on the cover of my USWeekly magazine, I instantly had a direction and started writing.

**I hope you enjoy this book as much as I loved writing it!

As the owner of a successful florist shop, Khloe Harper trusts her instincts. She has a strong bond with her family and friends, but after being betrayed by her last love, she's kept herself at arms’ length from romance. When dashing entertainment attorney Derek Thomas walks into her store, Khloe’s interest is piqued. What at first seems like a business relationship quickly turns into romance, and Derek slowly plucks away the petals she’s been hiding behind. Just as Khloe lets down her guard, she discovers that Derek may not be worthy of her love after all.

Frumpy Connie Albright has a faux fascination with an imaginary man named Walt, thinking that by sending herself flowers from him she’ll feel less out-of-place with the “mean girls” she works with. When she comes face to face with her possible prince charming and thinking she might have a happy ending, when a truth is revealed, she wonders if she’ll ever have a Cinderella story.

A recently widowed senior, Gabby Lewis, isn't ready to give up on love—which means releasing herself from survivor's guilt and taking a chance on finding happiness and companionship again. After signing up for an online dating site for senior citizens, much to her surprise, she’s matched with Harry, an energetic and loving man, who quickly eases himself into her heart. Will Gabby take the leap of falling in love again, knowing it’s possible to have two loves of her life?

As each woman’s story develops through flowers and cards sent from Khloe's shop during the Fall months, they begin to learn that love can only truly blossom when you trust your heart. 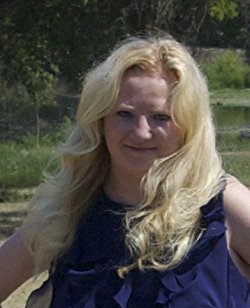 Author Bio:
Isabella grew up with a book in her hand, and to this day nothing has changed. She focuses her time on featuring other writers on her blog, Chick Lit Goddess, along with organizing Goddess Book Tours, and is a member of the Romance Writers of America.
She lives in Dallas with her husband, enjoys spicy Mexican food, margaritas, gin on the rocks (with a splash of lime). She loves spending time with family and friends and cheering on the Texas Rangers. Not only is Isabella an author, she’s also a Scentsy consultant and hoarder.


Isabella is the author of The Right Design and Cards From Khloe’s Flower Shop. Her short story, “Meet Me Under the Mistletoe,” was featured in Simon & Fig’s Christmas anthology, Merry & Bright. She’s currently working on another book.