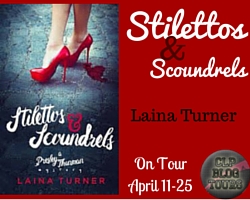 First, I want to give a big thanks to Caroline for letting me visit her blog and share my thoughts on how I keep my characters fresh.

My Presley Thurman series has 10, soon to be 11, books in the series and it can be hard to make sure not to write about the same things over and over. Especially, when you’re as forgetful as I am.

While people enjoy book series because they like the familiarity they bring, readers also want their familiar characters to experience new things.

As anyone reading this post knows life as we all live it is rarely the exact same from week to week. My books are the same way in the aspect that there are parts that are routine. Presley is always going to overindulge in coffee and good food, but I make sure there are enough differences to keep people wanting to read.

Presley’s life is a secondary storyline to the mystery element so it moves at a slower pace. Which I feel is typical of our normal lives. Most mystery books span a short time frame and it would seem odd if Presley’s personal life was at warp speed over and over. That’s the main difference of a series versus a stand alone. You can speed up the timeline in a stand-alone book because you want closure at the end. In a series, you can continue a particular thread for a few books.

From a technical perspective, I make sure I track the plots and character development aspects of each book so I don’t have 5 murders all the same 5 books in a row. From a creative standpoint, I am always writing down things I run across that happen to me, my friends, things my imagination brings me to use in stories. Since I rarely (ok never) come across murders, kidnappings, or the criminal element that is all my imagination but many of the circumstances leading up to and around these invented incidents are real.

Life IS stranger than fiction. 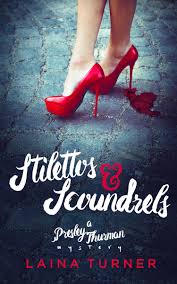 Presley tells her boss what he can do with her job in HR and embarks on a new career as a freelance journalist. What seems like a simple interview with a Senator turns to murder when the day after her interview the Senator turns up dead. Does the fact that Presley was one of the last people to see him alive make her a suspect? Her ex-boyfriend Cooper, who was in charge of the Senators security, might think so. Presley is determined to clear her name but can she do it and resist Cooper’s charms?

Excerpt from STILETTOS AND SCOUNDRELS

I took a sip of my latte, which was surprisingly good, and let my mind wander. I looked around the Coffee Café at the other customers, wondering if I would see a familiar face.

I noticed—of all people—Helen Daniels, the wife of Senator Tom Daniels, talking to a much younger man I didn’t recognize. Helen was even more attractive in person than she was in her pictures. I hadn’t seen her in person for years. Older than me by about ten years, I hadn’t known her personally and since Tom was elected senator, they spent most of their time in Washington, according to my mom.

Out of the corner of my eye, I saw Helen Daniels arguing with a man in her booth. Now that was interesting. Maybe I could pick up some juicy gossip to share with Katy. The man looked familiar to me, but I couldn’t quite place him. I wished there was someone here I could ask, and then it hit me, I thought the guy was Tobey Stone. He was the younger brother of a guy named Chris, who was in my grade back in high school. I wondered what he could have to argue about with someone like Helen Daniels.

As I contemplated my next step, a familiar face came into the coffee shop. Another high school buddy, Dirt Robinson, whose real name was Derrick. After eating dirt on a dare in fifth grade, he was given the nickname and it stuck, making him the coolest kid in junior high. I wondered if he still went by Dirt. I couldn’t fathom calling him anything else, but as an adult, I was sure it had lost some of its coolness. As he walked up to the counter, he saw me sitting at the table, broke into a wide smile, and strolled over.

“Look what the cat dragged in. To what do we owe this honor that you would grace us with your presence?” Dirt said to me with a mock bow.

I squealed and gave him a hug. Always great friends back in the day, we had lost touch. Last I had heard he was in the army. “It’s so good to see you, Dirt. Just visiting the family. What are you up to these days?”

“Look at me, sister! I’m the law,” he said with arrogance, though I knew he was joking. I took a closer look at him and noticed he was wearing a sheriff’s uniform. Finally, proof that something around this town had changed, or maybe proof the town was going crazy.

“Are you freaking kidding me? You, a cop? They must have been desperate.”

In our past lives, Dirt had run with the rowdy crowd, spending more time partying, causing trouble, and breaking the law than worrying about other people doing the right thing. I was shocked that he was a cop now. Nothing could have surprised me more. I would have guessed that he’d end up in jail, not running the jail. I was mostly kidding. He wasn’t that bad, but this was a stretch for the Dirt I had known.

“Not just a cop, Presley, but an elected official. That means they wanted me,” he said in a manner that I first took to be joking, but after looking at his face I saw he was dead serious. “Since I know how a juvenile delinquent’s mind works, I can figure them out. It makes me effective at my job.” He laughed. Having been one himself, I could see how this might now work to his advantage. “Besides, not much serious crime happens here, so I have a lot of time to fish. And you have to admit the uniform looks good on me.” He preened for me.

I laughed. “Still the same conceited jerk, I see. You don’t look half bad, Dirt, but Erik Estrada is still the sexiest cop,” I teased.

“C’mon, Pres, you’re breaking my heart. How can you not find me drop–dead gorgeous?” he said with exaggerated bravado.

I agreed that he looked good in his uniform. His lanky frame had filled out, giving him a sinewy hardness. Just less than six feet tall, he had beautiful curly black hair, which had been long in high school and was now cut short, military style. And the most beautiful blue eyes. “So, are you on duty now?” I asked. “Or can you stay for a while?”

“I thought we could catch up.”

“Of course. I have about thirty minutes.”

“Why? Planning on speeding on your way out of town?”

“Senator Daniels is in town for some big speech which has us all hopping.”

“Yeah, I saw Helen talking to Tobey Stone. They were arguing about something.”

“He was probably trying to convince her not to go public with the knowledge of Tom’s latest affair.”

“Yeah. Tobey is the Senator’s assistant and the Senator, he’s a womanizer,” Dirt said, and I could see his jaw clench.

“And you seem mad about that? Why do you care?”

“I just don’t like him. Thinks we all should jump to do his bidding.”

Before I could ask any more questions, his radio went off.

“Back at ya. Glad to know who to call if I get in trouble,” I said, with a teasing tap on his shoulder.

As a child Laina thought she would either be a truck driver (thanks to Jerry Reed in Smokey and the Bandit) or work at Taco Bell (her favorite restaurant as a child).

As she grew older she realized her talents lay in academics and business and for the last several years has been a business consultant and college professor where she uses the analytical side of her brain and not the side that makes up stories.

Through all her career choices she has continued to have a passion for writing. This stemmed from childhood whereas an only child she developed a vivid imagination spending most of her time making things up and thinking the Incredible Hulk lived in her closet.

Proud of her vast experiences in life from barrel racing to being on the dance team for a semi pro basketball team to being a mom of 2 amazing kids, she tells her family and friends that no one is safe from their escapades slipping in to her books.

Taking the plunge to write books (cozy mysteries and chick lit) that she actually let people read in 2010, she has worked her way up to being a real author, having 5 fans (maybe 6 now). Her blog, Writing is a Lifestyle, was launched to share the daily fun in the life of a Real Housewife of the Midwest along with the musing of other fabulous ladies.