My author friend, Jami Deise, is taking over my blog today!  Check out her new novel, KEEPING SCORE!  Buy links are at the bottom of the post. 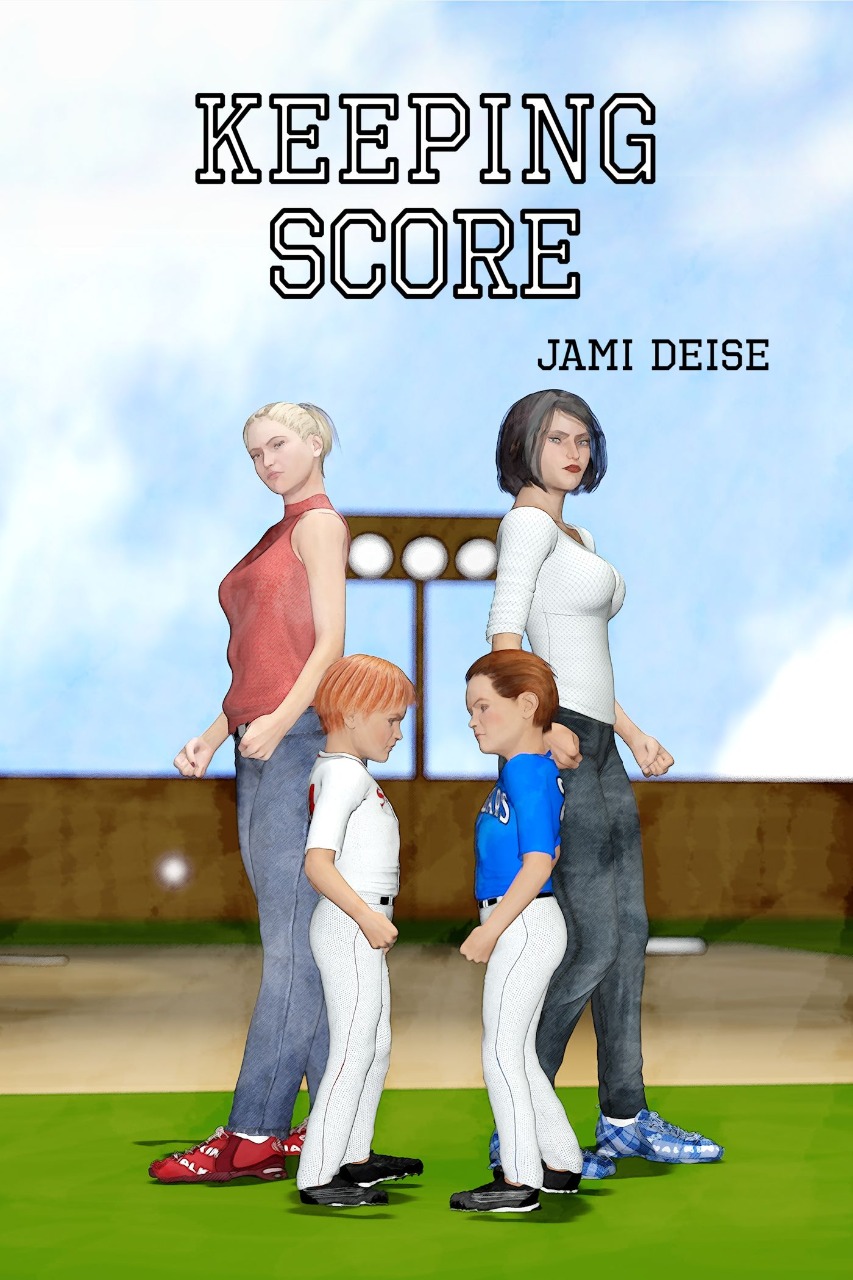 Thanks for having me on your blog, Caroline!

My name is Jami Deise, and I recently self-published my first novel, “Keeping Score.” “Keeping Score” is about divorced mom Shannon, whose 9-year-old son Sam decides he wants to play travel baseball rather than “rec” (recreation) baseball. My son Alex has been obsessed with baseball since he was 6 years old, and I have so many stories about what he went through on the road to becoming a college pitcher. In fact, it took him 2 years to even get on a travel team because he kept flubbing up at try-outs! The competition, the politics, the mean kids, the blind umpires…  being a baseball parent is like living on a different planet. At the same time, all those trials and tribulations taught my son so many valuable lessons. How to control his emotions. How to persevere. How to get better and stronger. That’s what I tried to write about in “Keeping Score;” not just about the baseball stories or the competition between the baseball parents, but how sports can help shape a child’s character. Because a child who can walk back up into the batter’s box after striking out at his last at bat, or get back on the mound after giving up a home run, will be well-equipped to handle challenges off the field.

Below I’ve included one of my favorite scenes. Shannon isn’t an athlete – neither am I – and she does something for Sam I could never imagine doing for Alex: pulling on gear and catching a bull pen for him so he can get ready to pitch in a game the next day….

It was still early, so we headed home for a quick costume change, then hit the softball field at Chamberlin. Luckily, no one had grabbed the field for practice yet, so we didn't have an audience. I started to pull on the catcher's gear, but Sam stopped me.

"We have to warm up first. Then you can get dressed."

I dropped the catcher's gear near the dugout bench, and walked with Sam to the first base line. I stuffed my left hand into the mitt. The glove was so stiff, I could barely open it.

"Yeah. We should have bought you one that was already broken in. And a regular glove. That one's not really made for playing catch."

Sam pulled his arm over his shoulder, stretched out a bit, touched his toes. "Mom, you really should stretch first," he reprimanded.

"I warned you…" He put on his glove, grabbed the baseball, and threw.

I put out my hand. I could see the ball coming toward me -- and suddenly, I couldn't. Where did the damn -- ouch! It crashed right into my shin. I knew I should have put the gear on right away.

"Mom," Sam scolded, "you have to keep your eye on the ball at all times!"

Baseball looks a lot easier to play than it actually is.

I hunted for the ball and found it underneath the dugout bench. My shin must be a lot more rigid than I thought. I walked back toward Sam, swung my arm back, and threw.

The ball dribbled out of my hand and landed about three feet in front of me.

Sam exploded in laughter, doubling over and holding his stomach. It was the snorty, spitty kind of laughter that sometimes leads to a pants wetting.

"I can't believe you're like fifty years old and no one ever taught you how to throw!"

"I am nowhere near fifty and who would have taught me?"

"Maybe Coach Kevin should give you a pitching lesson!"

After Sam got his laughing under control, we started throwing again. He gave me a few pointers -- something about keeping my elbow up, and using my glove to point at him. When I followed them, I could get the ball to go a little further. But he was still biting his lip to keep from giggling by the time we were done.

Sam helped me strap on the catcher's gear. The leg guards were obvious, but the chest protector had hooks and fasteners and other things I couldn't figure out. Then, when I put on the mask, I was done. I couldn't see a damn thing. How could anyone catch and throw a ball wearing this thing?

I had completely forgotten about the crouching down.

Sam stood a few feet in front of the mound and threw me the ball. I couldn't see where it went. Until -- bonk! It hit me right on the head. I was grateful for the helmet.

I thought that would send Sam into another cascade of giggles, but instead he just looked at me. At least, I think he was looking at me. It was hard to tell underneath the life-saving helmet.

"Mom, we're going to have a problem."

And I made myself do it. If no one else could help my son get in the work that he needed, then I would. I missed a bunch of balls, and when I crouched down, it was even worse. The ball hit me on top of the head, on the mask, on the chest protector, and even in the neck -- which really hurt, because there's no protection there. But little by little, I started to see the ball.

Of course, when I finally got the glove on it, the ball popped right back out.

"You have to squeeze it, Mom," but I thought I heard a small note of pride.

I had only caught about five real pitches when Sam said it was time to pack up.

"I have an actual game tomorrow," he said in a tone that was almost patronizing. "I can't waste everything tonight."

As we walked to the parking lot -- with me still in my catcher's gear -- a team of older boys and their parents were there, unpacking baseball equipment. A few of them gave me a very strange look.

But boy did I feel proud when I heard one of the dads say, "Now THAT is a real baseball mom."