DEAR INTERNET: IT'S ME, AVERY

Jen and I met on Twitter, of all places, and I immediately loved her snarky sense of humor.  If you're looking for more laughs, visit her blog here.  She's always got a new post that will make you LOL.

Take it away, Jen!

If I don’t invite you over for dinner—don’t be offended.

You see, I’ve sort of slacked off on the housecleaning.

Why? you may ask (while silently cheering for the woman with whom you now have a much closer bond.)

It’s because I’ve learned something very, very important over the years.

I was once one of you.

Every Saturday morning, I’d clean for several hours—savouring the fake orange scent of my Lysol floor wipes. That feeling of wiping away the layer of dust on the armoire. The vacuum’s efficient whooshing of the previous week’s dirt.

Somewhere, in the past year or so, I’ve come to an important realization.

It’s like, no matter how much I clean, I know someone else is going to bleach their floors—including the baseboards—just for the fun of it.

Someone else will wash their walls at the beginning of each season to remove the grime—actually moving the appliances to do so!

Someone else will clean out all of their kitchen cupboards, put in a fresh layer of shelf paper, and arrange their cutlery neatly in their proper holders.

I’ll never win this contest. So, why try?

Instead, I’m going to ignore the dust that is hanging from the ceiling fan blades (and take another antihistamine for my allergies).

I’m going to ignore that sticky spot on the floor by the garbage.

I’m going to leave the streaks on the windows from where the puppy keeps guard over our street.

I’m not going to be able to see my face in the countertop’s shiny surface.

Because I’m taking a stand against giving a rat’s ass about anyone else’s opinion but mine.

As I like to say, the Queen isn’t coming over. And, I don’t really care what the UPS delivery guy thinks when I open the door and the cushions on the couch are not plumped in exactly the way I always made sure they were.

Of course, every once in a while, my OCD self takes stock of the smudgy glass tabletops, the curtains that would benefit from a wash, and the crumbs in the pots and pans drawer.

In a particularly weak moment a few weeks ago, I was tempted into falling into my old habits.

I dusted, shined, vacuumed, and mopped.

And then the puppy ran in from outside and bounced all over the clean tile, my gleaming hardwood and the leather couch with his wet paws.

After my initial outcry, I decided it’d be far easier to simply have a latté or—better yet—a glass of wine and read a book.

You see? When you lower your standards, everyone’s a winner!

About DEAR INTERNET: IT'S ME, AVERY

Don’t try to tell me that you’ve never checked that weird mole on your thigh on WebMD. Or how to fold meringue on Epicurious. And, there’s no way that I’m the only one who clears her search history after looking up how to give a great bl— (Um, that last one’s not important.)

When newspaper reporter Avery Fowler discovers her husband is having an affair, the online help site HowTo.com is where she turns to navigate this challenging stage of her life.

If the Internet is Avery’s information god, then HowTo.com is her Holy Grail. Its live chat option is like having a virtual life coach (a snippy British chippy named Clementine) for the low, low price of fourteen ninety-five a month.

Add into the mix a new boss, Victoria van Horne, whose managerial style calls to mind the Wicked Bitch Witch of the West—or the Anti-Christ—and the poor girl needs all the help she can get! The stakes rise and hilarity ensues as our heroine struggles to take control of her personal life and topple her boss after she learns Victoria’s guilty secret.

With Clementine (virtually) in tow, our heroine tackles such tricky situations as dating after divorce, sex once nothing points north anymore, and how to cover attempted murder scenes (despite a paralyzing fear of blood) as the new and improved Avery Fowler 2.0. 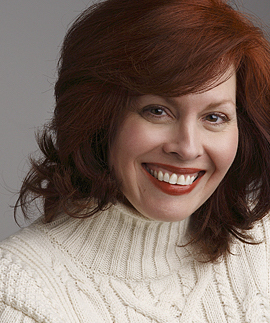 Author Jennifer Ammoscato – solving the world’s problems one cosmo at a time.

Jennifer Ammoscato is a paid, productive member of society. Frankly, it’s not enough. Therefore, May 2015 will see the launch of her debut novel, “Dear Internet: It’s Me, Avery” (The “Avery Fowler 2.0” series, Book I).

During the day, she is an intrepid writer/editor for the public relations department of a Canadian university. By night, she fights crime and the urge to organize closets and stuff herself with salted chocolate caramels.

Jennifer began writing as a child, producing such classics as “The Occurrence” (she understood the appeal of werewolves long before Stephenie Meyer). She had to search for the courage to write a novel, though. “That’s so F. Scott Fitzgerald and Ernest Hemingway. I didn’t know if I had the alcohol capacity for it.” However, after being goaded encouraged by a friend, she took the leap.

Dreams do not inspire Jennifer’s books. In fact, they tend to terrify her. In particular, the ever- popular naked-at-school or I-have-a-final-exam-and-didn’t-study dreams. She usually just makes stuff up.

She is married to her husband, Ezio. As opposed to someone else’s husband (insert name here). She is the proud mom of two very tall sons, Dante and Christian.