Our favorite fantasy football queen is back in

the latest in the Queen of the League series by

It's another hilarious, compelling read we've come to expect from this series.  I'm an exhausted mess this morning thanks to Laura--I sat up reading past midnight because I just had to find out what happened to Harper and Brook.

Keep reading for a fun interview she did with me, as well as a giveaway!

After rushing to the altar and moving across the country, Harper Duquaine (or is it MacLaughlin, now?) is in uncharted territory. What once seemed like a promising opportunity to advance her husband’s career while giving her some much-needed independence and adventure has proven to be a bust. By the time fall rolls around again, she’s back in a boring job by day and overstocking her inventory of crocheted scarves by night. Not even the prospect of a new football season holds much excitement.

At least that’s what she thought. Harper suddenly finds herself the manager of not one but two fantasy football teams—each with its own set of drama. Between the added pressure of her new marriage, an unexpected career prospect, and the hiccups created by people from her past and present worlds, Harper quickly finds herself going from bored to overwhelmed.

Can she hold up under the pressure, or will Harper learn the hard way that the turf isn’t always greener on the other field?

My interview with Laura:

So Harper is in a new town, so that means a new crew for her fantasy football league.  Can we expect some new alpha males in THREE & OUT?

There is a new, somewhat significant alpha male in THREE & OUT, but he isn’t in either of Harper’s fantasy football leagues. While she still plays with the Mega Ballerz back in Nebraska, her crew in Seattle has the distinction of being all female. The Real Coaches’ Wives of Seattle is a league comprised entirely of the wives and girlfriends of the coaches and staff members on the fictional Seattle State football team. The commissioner in this league makes the guys in the Mega Ballerz look like a bunch of prince charmings. Harper will have more than bragging rights and a prize pool at stake with this cutthroat group.

Now that Harper and the oh-so-loveable Brook are married, did you find it difficult to keep the spark in their relationship alive in this book?

This was a fun an interesting step for me to explore as a writer, because saying “I do” certainly changes dynamics. With Brook’s work schedule even busier, and the demands even greater, they don’t get a ton of time together. Thanks to another complication in their lives, they have almost no alone. So when they do steal precious moments together, they definitely make it count. While they might be physically apart, they come up with some inventive ways for keeping in touch. Brook, in particular, acquires a taste for overusing emojis and sending snaps when they aren’t together. The new technology might seem modern, but in a way, it kind of felt like a nod to the love letters you imagine in historical romances. Only instead of flowery prose and sonnets, they’re sending each other hearts and smiley faces.

Not only do you have a cast of characters, but you also made up a league full of football players for the fantasy league.  How do you keep track of all the football players and their stats?

Keeping track of the fictional football players, and the weekly matchups, is definitely the most challenging part of this story. It became twice as difficult this season, because there were two teams, two leagues, and two sets of games to track. I write with Scrivener, which is writing software with fantastic organizational components. In Scrivener, I keep a file of Harper’s players and a schedule for how her team will perform on each week, including wins, losses, and points. I figure out this part early in the plotting process, because so much of Harper’s world gets shaped by what happens with her players. That said, I get a little confused sometimes, and I am super fortunate to have a couple of vigilant beta readers, and my copywriter Chrissy Wolfe of EFC, who help me make sure players names and positions stay consistent. Another challenge was coming up with names for so many people. For the first book, I enlisted the help of my blog readers. For the second, I held court at my sister’s bar and bounced names back and forth with her for an evening. For THREE & OUT . . . I honestly don’t remember. There were a handful of repeat players from previous seasons and the rest I kind of made up under the duress of a deadline.

When you started the series, did you think you’d be moving Brook and Harper across the country to start a new life?

I initially started this series as a standalone book. After conducting interviews with a couple of coaches and the significant other of a coach, I realized there was a lot more drama to mine in football beyond the first book, and the series was born. Once I committed to a series, I knew I’d send them to Seattle for the third book. FIRST & GOAL explores the ins and outs of fantasy football. GOING FOR TWO builds on that, but also focuses on the world of high school football. THREE & OUT moves them into college football, which seemed like a natural progression. I chose Seattle, because I love the Pacific Northwest and wanted to set a story there. I actually initially planned to set the series there, but early in the writing process my hometown of Lincoln, Nebraska, felt like a more natural place to begin. Young coaches like Brook seem to move around a bit early in their careers. Harper also seems to have a latent wanderlust that partially stems from trying to find personal and professional fulfillment. Once they were together, it only seemed natural that they would hit the road at some point.

Are you planning more adventures for Harper in the future?

It depends on when you ask me! I keep going back and forth. I’m pretty satisfied with where I left Harper at the end of this book, because at a certain point, you kind of want to stop beating up your characters and give them a chance to live happily ever after. But… I left the door open for a continuation of it feels right. As of now, I do not have a definite plan or schedule to write a fourth story, but I have an idea of what I’d like to explore next if there ever came a FOURTH & INCHES. What really excites me is the possibility of a spin-off. There is a certain character who really seems to want a starring role. But, I have other story ideas itching to be told, so we’ll see. In a few months, I might miss Harper enough to push them aside and bring her out of retirement. Even if Harper isn’t back for next football season, there’s a good chance we could visit her down the road. How’s that for a non-committal answer? 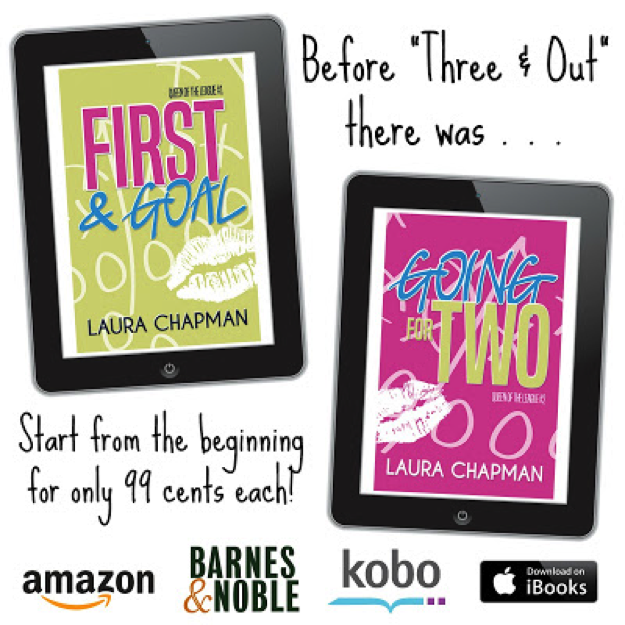 In Laura Chapman’s Queen of the League series, Harper Duquaine joins a fantasy football league to prove she can hang with the guys. Only problem: she doesn’t know a sleeper from a keeper (or any of the other lingo thrown her way). Her competitive streak soon emerges, and she catches the interest of her top two competitors. With a slew of conflicting advice in her real and fantasy worlds, Harper must figure out how to play the game and come out a winner.

Laura Chapman is the author of First & Goal, Going for Two, Three & Out, and The Marrying Type.  Her holiday novellas Making Christmas and What Happens at Midnight will be released on November 8, and are now available for pre-order. A native Nebraskan, she loves football, Netflix marathons, and her cats, Jane and Bingley. Connect with her online on Facebook, Twitter, Instagram, and YouTube and on her website at www.laurachapmanbooks.com.